September 2012 - The start of a new Era! Changing the Drivetrain to the Gates Carbon Drive System.

We've been thinking of replacing our Thorn Sterling Frames with something a bit more heavy duty as Thorn Cycles do put a 15 kg load limit on the Sterling Frame. We generally carry slightly more than this when we tour and we've been over some very rough roads, but we can report that we've never noticed any sort of problem with them. It did however start to worry us a bit during the Sweden-Finland Tour, so on return to Australia we started to look for other options.

We considered the new Thorn Nomad Mk2, but having wanted to try a Gates Carbon Drive for some time, we were steered towards frames which have a split in the rear triangle so that the belt can be fitted.

Having investigated most of the frame manufacturers listed by Gates, we eventually decided on the Van Nicholas Pioneer frame. Being titanium it also offers some advantages over other frame materials, with the biggest disadvantage being cost. As titanium frames go, Van Nicholas seem quite reasonable (particularly since the perfectly sized bike was listed in their Outlet store).

With that, the selection of components began, with the final list as shown in the Table below. Much of the list is made up of our previous gear which has performed so well.

We'll give the Gates Carbon Drive system a few months of daily commuting before providing some feedback on how it compares to the normal chain drive system that we are used to (LINK to Review). If you're interested, you can check out our experiences on the specific components that we have used up to now, which is getting considerable as most items have done approximately 54,000 km on Mike's bike, and over 39,000 km on Judith's bike. 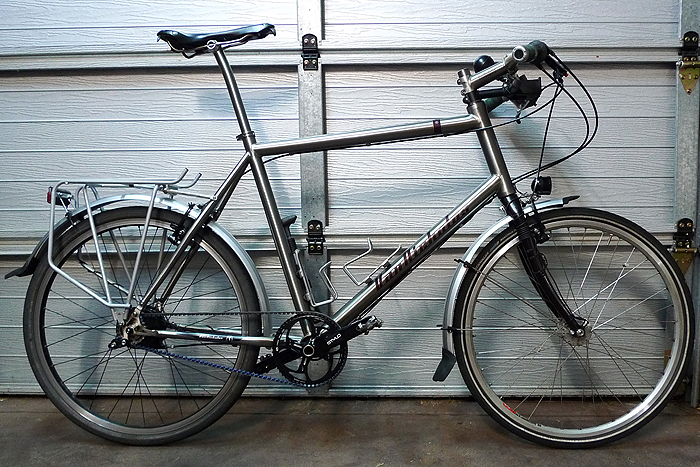 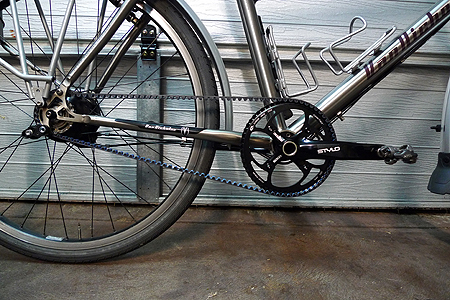 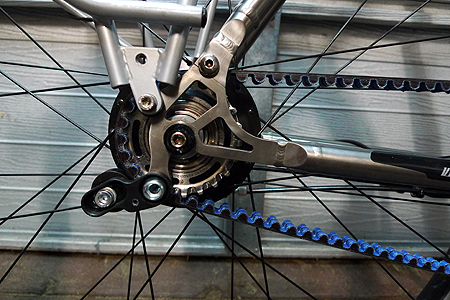 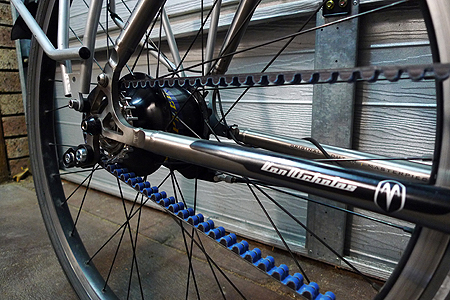 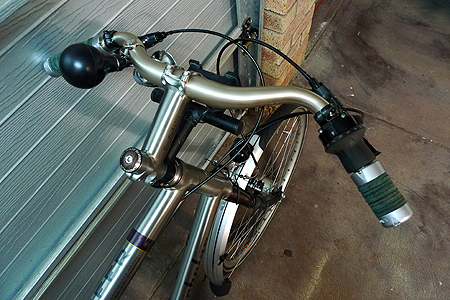 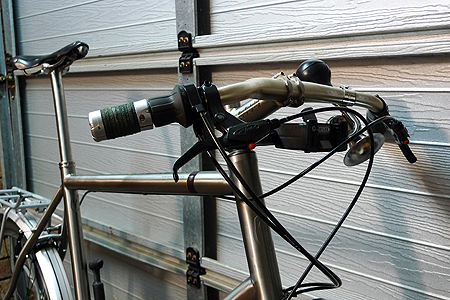 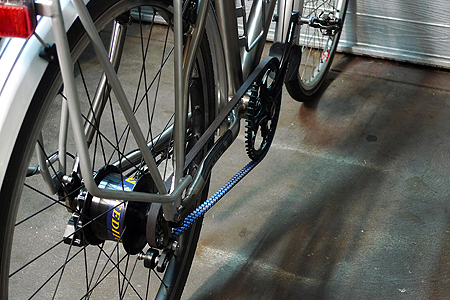 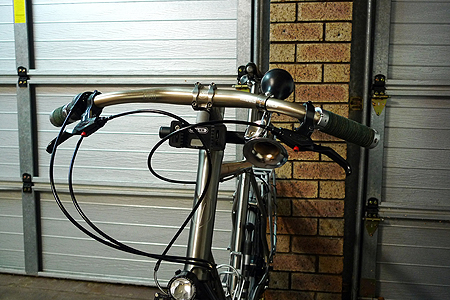 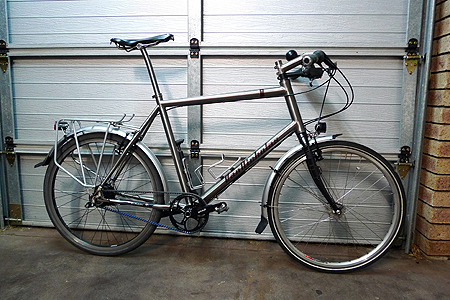 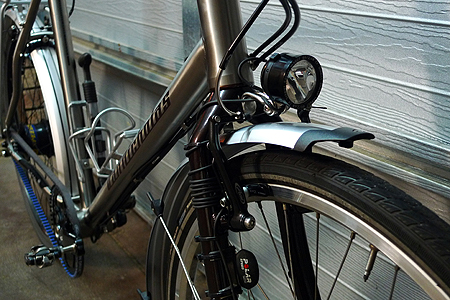 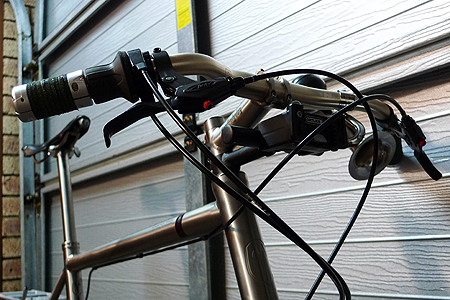 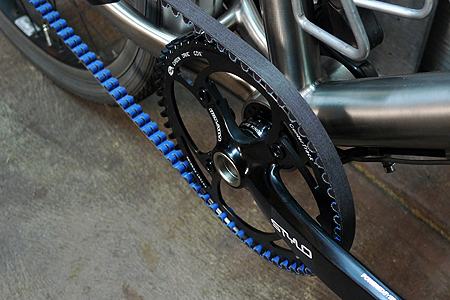 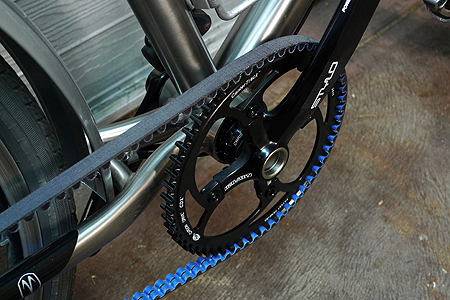 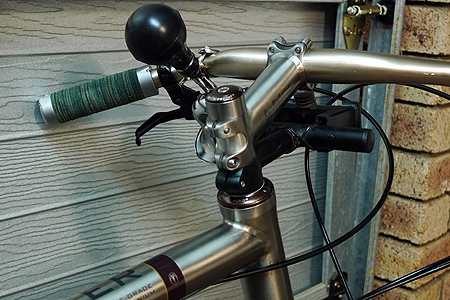 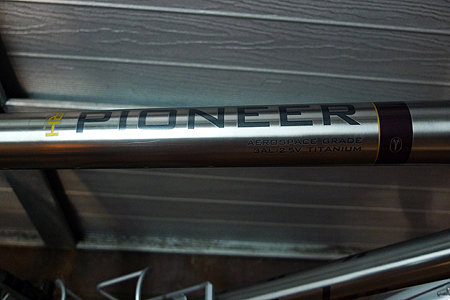 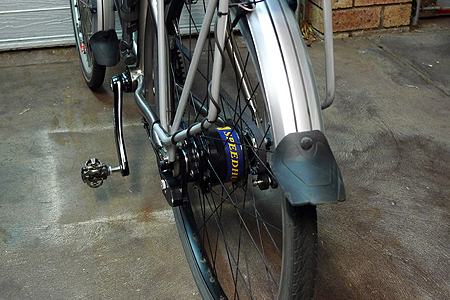 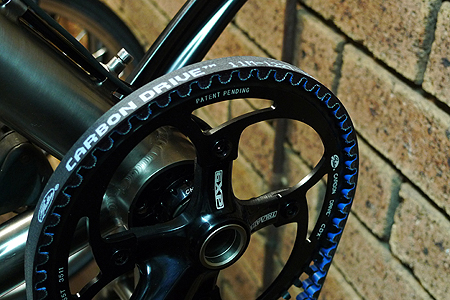 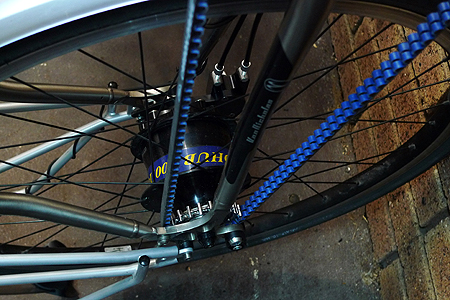 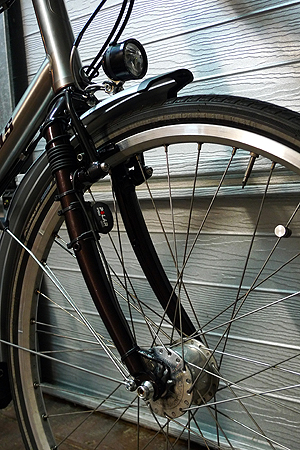 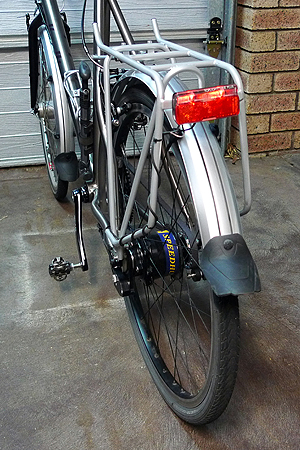 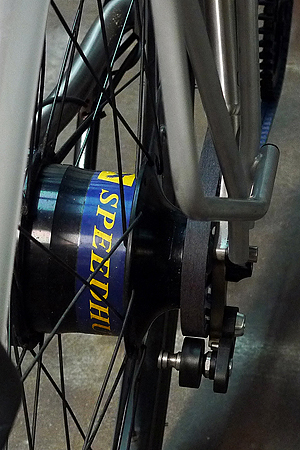 After 32,000 combined kilometres of using our Rohloff converted hardtail mountain bikes as touring/commuting machines, in September 2009 we decided to take the plunge and order frames specifically suited to the Rohloff Speedhub. We had narrowed the selection down to steel frames made by Thorn in the UK (http://www.thorncycles.co.uk/) and sold through the shop front of St. John Street Cycles (http://www.sjscycles.co.uk/), but the decision as to which model was difficult. Requiring a Rohloff Speedhub specific frame narrowed the choice down to either the Thorn Sterling, or the Thorn Nomad with S&S Couplings.

Details of the two bikes can be found at the Thorn website, but basically the Sterling has a mountain bike geometry and can be used for "light" off-road touring, while the Nomad is a stronger do-it-all round-the-world heavy-duty tourer. Thorn have no faith in disc brakes, but both bikes do have mountings for disc brakes at the rear, but the fork which is included with the Nomad does not allow for these to be fitted (the Sterling does not come with a fork, but is designed for suspension forks). As we prefer the durability issues of disc brakes (and less rim wear being a major factor for winter commuting in Perth), the significant cost saving, the lighter weight, and what generally seems to suit our bicycle touring better, we decided on Sterlings (with the thought that we wouldn't have lost too much if we ever decided to upgrade to the Nomad).

Out of the box, the Sterling is beautiful in its Matt Black finish and has all the brazed on fittings for the EX Box Rohloff, mudguards, cable routing, etc. It comes with an FSA headset (which we would replace with a Chris King Headset) and a basic Thorn seatpost (which we would replace with a Thomson Elite seatpost) - So basically it was just the frame we were after. One surprise was that the frame didn't come with any bolts to seal the bottle cage mounting holes, etc.

As with the previous bikes, these were built from scratch with the components described below. Thorn advised that they couldn't treat the inside the frames prior to shipment (air-travel) so we ended up trying Heavy Duty aerosol Lanolin by Lanotec (http://www.lanotec.com.au/) to treat the inside of the frame tubing. It was applied very easily and initial impressions are that it should do a good job of preventing internal rust.

When choosing components for the bikes, we always try and use what we believe is the best equipment for the job at hand. All components have always been ordered separately from many suppliers and put together by ourselves. Having built the bikes from scratch, one also learns how all the pieces fit together which may help with maintenance if/when stuck in the middle of nowhere. Besides being very rewarding completing the build ourselves, it was also great to select each component individually based on its merits.

Details of the bikes are as follows: